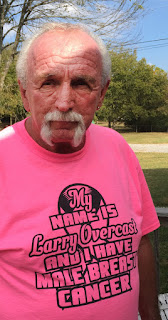 They say you're cancer-free but in the back of your mind, there's always a chance of the 'boogerman' will jump up and get'ya.

I was a Shelbyville firefighter back in 1973, and I worked there until '76. then I came back in '86 and officially retired 2011; the whole time, we didn't have any breathing (protection) apparatus. I worked there of a total, probably 33 years as a firefighter; a driver; a captain, but this captain still had to fight fires.

We call it fire hall number one- as one of three stations in the city of Shelbyville, Tennessee.  When I came back in '86 they started carrying respiratory protection on their trucks, but we didn't use em, and then with all the new plastics and the new synthetic materials and stuff coming out; I think I was one of the first ones that started using it because I didn't want all that stuff in my lungs. Out of it, they say I've got a touch of COPD; I don't know if that came from the fire department because I never smoked.

"I HAVE BREAST CANCER!"
Around September 2016. I was out weed eating and mowing the grass. I wiped off sticks and sweat from my chest and that's when I felt something. I tried to wipe it off, and I looked down, and it was a little knot, about the size of the end of your little finger. 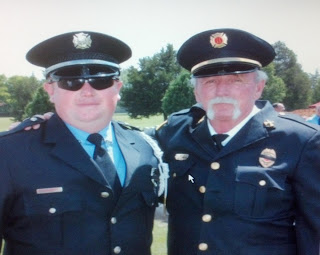 Just so happens I had a yearly physical with my doctor at that time. My blood and everything checked out alright; and she said, “you're in good shape.”  I found this to be a good time to point out the knot underneath my chest. She first thought it was nothing more than an ingrown hair.  I was not satisfied with that- and decided to get a second opinion with a nurse practitioner who saw it as something else; “I think we need to go a little further,” she said, “I'm not trying to scare you, but this is the way breast cancer starts out,” and I said, “okay.”

I was then referred to Dr. James Carter who sent me to an imaging place, and they did a CAT Scan, then a 3D Mammogram then an ultrasound- and all that confirmed there was something definitely there. Everything they did showed something, that's the reason I went and had a biopsy- and that confirmed the breast cancer. My first reaction came from survival mode: “well, doc- there's a knife... you're a doctor, just cut it out!” Of course, that's not the way it works with doctors; he had to bring this to his people and make a whole plan.    At this point, I just told him, "you do whatever you gotta do; if you gotta do a mastectomy, or cut the whole thing out, or you gotta go further; do what you do-- " 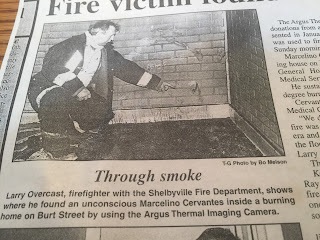 Looking back at that, I've really been lucky; I thought I was going to die. I underwent the mastectomy on my left breast. then they gave me aggressive chemo. Of course you lose your hair, but my fingernails and toenails also fell off.  Also, my top teeth and part of my bottom teeth were destroyed and started breaking off like chalk.

CANCER SOURCE?
My mom had ovarian cancer at 1955; they gave her three months to live. My dad had throat cancer such that he couldn't talk because they removed his voice box.  Regardless of this, they didn't seem to link it to my family, but they didn't say anything to me about connecting it to being a firefighter either. When they tell you that you've got cancer, it just takes the air out of the room!  I wasn't into thinking about how I got it- I just went into the survival mode. I didn't bother to ask - but within the past year, I've been hearing a lot about firemen having cancers like prostate cancer or lung cancer.  Looking at this now, I can see the connection to firefighting. 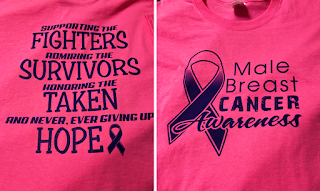 PERSONAL ADVOCACY
I never knew anybody else to have breast cancer til I met the Male Breast Cancer Coalition.  Today, I'm proud to wear shirts like this with a message to the world: “Supporting the fighters, admiring the survivors, honoring the taken, and never giving up hope.”  Somewhere out there, another cancer comes up. And I tell everybody I  had breast cancer... and I say, “you need to go have a mammogram!” The public needs to know that men get breast cancer too... black or white; daddy; uncle; brother; son. It can happen to a male; it happened to me, and I was in tip-top shape; I didn't take any kind of medicine what so ever, and if it can happen to me; it can happen to you.

This article is sponsored by: 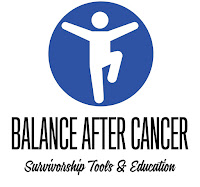 NYCRA NEWS
Bay Shore, NY - New York, United States
NYCRA NEWS is a free, all-volunteer public educational health news source produced by the NY Cancer Resource Alliance. Our contributors, publishers, (video) producers and editors unite to create and share current information related to health, wellness and the current state of our medical community at large. We collaborate with experts, researchers and health agencies to provide our readers with confirmed materials and resources to be shared throughout our network of partner foundations and cancer organizations.