R U Dense? - By Julia Chiappetta

Ha-ha. Now, hold on readers, it’s been a while since I last wrote, but please stay with me.   When I heard the words ‘You have Dense Breasts’ I had no clue what that meant.

From age 35, commencing with my first mammogram to age 45, when I was diagnosed with Stage II Infiltrating Ductal Carcinoma (IDC), those utterances, you have dense breasts, were always part of my annual mammography reading and yet I never asked anyone to help me understand.  Why was I so dense?  Shame on me for seeking more information and shame on the hospital and doctors for never sitting me down to expound on the risks, or suggest an ultrasound-the next course of action.  First Do No Harm, right?

Let’s start from the beginning.  December 1999, had my end of year annual mammogram at the hospital. Result, “you have dense breasts, but everything looks fine, see you in one year.” Three months later, I felt it and I knew it was different.  I had a pit in my stomach, it was during my monthly self-exam. It felt like a small mosquito bite on the outer edge of my right breast, but it was March in Connecticut and no mosquitos were biting. I knew it was different, thanks to my doctor Carine Klein, who had taught me how to self-examine years back.  Her generous instruction became one of the most important lessons of my life that day.  You see, when you systematically perform a self-exam month after month you get to know the usual lumps and bumps that are the norm for your breasts, but this time, I was acutely aware this was NOT the norm. All of my instincts were screaming out - there is something foreign in your breast!

The next day I called and was sent me over to the hospital for another mammogram. Result, it is nothing, the scan looked normal and not to worry, But…I was worried and crying and asking for a biopsy. I just knew it was not good and it was humiliating being brushed off and having to beg for a biopsy. They finally relented. Two days later I was waking from the biopsy and returned home.  The next day, I had THE CALL.

‘First of all, I want to apologize, I learned an important lesson, that I need to listen more closely to my patients; I am sorry to say that you have Stage II Infiltrating Ductal Carcinoma and you need to act fast,” said my surgeon.

What?  Woah!  I caught my breath and realized it was the big C!

I often imagine my life had I been offered an ultrasound earlier, but on God has that information, and what ifs are counterproductive.

Twenty-one years later, I am still here. Cancer changed my life, as it does everyone who has been on this journey.

I surrendered my healing platform over to Jesus years ago and began delving into research that resulted in changing my entire life, diet, lifestyle and seeking doctors and practitioners who would become my tribe, my people to help me become whole again and thrive. I had become the CEO over my own body, making informed choices along with the guidance of my trusted tribe of experts. One of those experts was Dr. Robert Bard on Park Avenue in NYC. I could write pages about him, but let’s just say, he is a brilliant, trail blazer, well known around the globe and a pioneer of cutting-edge technology that our hospital and no one within miles and miles even knows about. 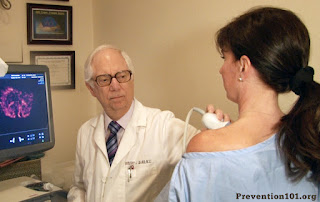 Dr. Bard introduced me to Joe Cappello, co-founder of AreYouDense.org, along with his wife Nancy, who like me had dense breasts and ended up leaving us too early. I never met Nancy, but I sure wish I had. Together they started this educational movement so that the world would come to know the risks of dense breasts. They took their research and resolve to Washington DC, to present ultrasound as the standard for all  dense breast screening.

Last month, I was the first person in the New York area to be scanned at Dr. Bard’s office with new technology designed by GE specific to dense breasts? I can tell you that as I lay comfortably on an exam table, the technology hovered over my breasts for the screening vs. what I liken to having my breasts squeezed under a garage door wrenching in pain.

- Most men have dense breasts

- Many men are diagnosed with breast cancer

- First responders, like Firefighters have a high incidence of breast cancer due to the toxins they are exposed to

- 85% of all breast cancers are environmental which includes diet, lifestyle, fitness and stress

- Traditional mammography is 50% accurate at best

So…Are you Dense? Please find out and "Get Checked Now!"

For more information: visit: www.BreastCancerNYC.com or make an appointment with Dr. Robert L. Bard for a primary, supplemental or second opinion at: www.CancerScan.com  . Also, check out the latest videos and research work on Dense Breasts as part of the "Are You Dense" Foundation's national push to bring new education & advocacy

SEE THE PAPER VERSION: FROM THE GREENWICH SENTINEL

Also check out NYCRA-NEWS feature on: "UNDERDIAGNOSED WOMEN".  In the name of patient advocacy and vigilance, we highlight landmark stories of victims like Gilda Radner and Nancy Cappello as some of the names in history that aided the the exposure of this medical crisis. Historically, there is substantial evidence of gross disregard and dismissive response on the part of the medical establishment in the way women have been diagnosed. Critics have speculated a vast array of reasons for this ‐ from professional carelessness and laziness to blatant sexism (and other forms of discrimination) to a lack of updated education in current research. But whatever the reasons may be, the lack of performance and attention in the hands of the medical diagnostician have resulted in tremendous danger to the patient. The most extreme cases of this underdiagnosing led to major health disorders and even death due to false negatives and missed conclusions from physicians and radiologists.
Special thanks to our friends, sponsors and all contributors whose help in publishing this segment could not have been made possible: